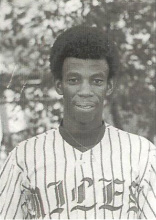 Anderson Campbell Jr. (2008)
Anderson Campbell Jr. played baseball and basketball at Wenonah High School. He received a baseball scholarship from Miles College. He was a pitcher and lettered all four years. His team won the Southern Intercollegiate Athletic Association (SIAC) Championship. He coached his daughter's eighth grade basketball team to a city championship in 1999. He has also coached his son in baseball for seven years. He is a member of Alpha Phi Chapter of Omega Psi Phi Fraternity, Inc., and a member of McComb Chapel A.M.E. Zion where he serves as a steward and head of the "Food Committee". He is employed as a machinist at U. S. Pipe company.
​
Return to List>>>