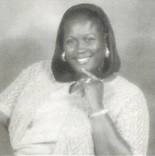 Brenda Hammonds-Lockett (2008)  ​
Brenda Nicole Hammonds-Lockett graduated with honors from Charles Lincoln Harper High School of Atlanta, Georgia in 1987. She participated in softball and basketball and was Most Valuable Player ( MVP) in basketball in the eight grade, averaging 20 points a game and voted co-captain of the team. She was also captain of the softball team. She attended Miles College from 1987 - 1990. She played power forward and center on the basketball team. She participated in the work study program in the Health Clinic. She was a Golden Bear Cheerleader in 1988 - 1989 and was an Omega Sweetheart in 1988. She majored in Business Administration and minored in Business Education. After graduating from Miles College in 1990, she worked for Lockheed Martin and later for Bank of America. She has been working for the State of Georgia for 13 years in the Department of Juvenile Justice and works very closely with courts, lawyers, judges and parents of the detained youth.Her awards include: Writing that Works, Proofreading Essentials, Organization Skills, Interpersonal Effectiveness Skills, Professional Secretaries Development Program, Customer Service Skills, and HIPPA Compliant (Security Training). Breda is married to Horace Craig Lockett and they have five children.