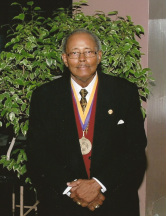 Columbus J. Hasberry (2013)
Columbus J. Hasberry calls Miles College a blessing, both to himself and to other students and alumni. Mr. Hasberry, who majored in Physical Education, Health and Natural Science, earned his Bachelor’s degree from Miles College in 1961. He became a Physical Education teacher and a high school basketball coach after graduation, and distinguished himself on the basketball courts. Columbus J. Has- berry was honored three times by the Birmingham Grid Forecaster as Coach of the Year, in 1969, 1970 and 1973. Mr. Hasberry guided his basketball team to the Division III Championship in 1973, and he was the winning coach for the North-South All Star Team game the same year. Columbus J. Hasberry furthered his education, earning a Master’s Degree in School Administration at the University of Montevallo, along with an AA Advanced degree in Administration Supervision. Between 1974 and 1997, Mr. Hasberry served as principal of three elementary schools.
Not content with just one successful career, Columbus J. Hasberry became an insurance agent with Allstate Insurance in 1997; he was named rookie of the year with Allstate Insurance in 1998. Mr. Hasberry joined Lincoln Heritage Insurance Company in 2011. He volunteers at the Prince of Peace Catholic Church, assisting families with final expenses planning through the Funeral Advantage Plans offered by Lincoln Heritage Insurance, and he does volunteer work at Hoover High School and Bumpus Middle School. Columbus J. Hasberry wishes to enhance the growth of Miles College by assisting with its renewal project, to further its blessings to its students and community.