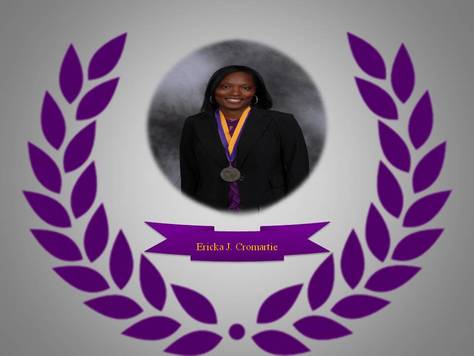 Ericka J. Cromartie 2017
Ericka J. Cromartie is the Head Girls’ Basketball Coach at Florida A&M University Developmental Research School, where she ensures each team member master the skills of playing basketball through exposure to the game.
Coach Cromartie is the daughter of Jerome and Claudette Cromartie and a current resident of Midway, Florida. Her mom played a strong leadership role in her community which inspired her to get involved and give back to her community. The city of Midway maybe a small city, but its traditions, atmosphere, and community support makes it much bigger at heart.
​Following Ericka’s graduation in 2001 from FAMU DRS, she attended Miles College in Birmingham, Alabama on a four-year basketball scholarship.  She played point guard on the women's basketball team 2001-2005. She was freshman player of the year and MVP her senior year. Upon graduating from Miles College, Ericka returned to the state of Florida to attend The Florida State University, where she earned a Master’s Degree in Physical Education. Ericka began her teaching and coaching career in 2008 at Crossroad Academy Charter School in Quincy, Florida. In 2012-13, Ericka was given the opportunity to teach at her alma mater (FAMU DRS) and earned her second Masters Degree in Sports Management from Florida Agriculture and Mechanical University (Fall 2013).
During the 2014-15 seasons, she began coaching girls’ basketball at FAMU DRS, in which her team won the 2A State Championship and she was voted the “2A Coach of the Year.” The following season (2015-16) season, her team won back to back State Championships, and she again was voted “2A Coach of the Year”. At the end of the 2016-17 seasons, Ericka Cromartie led her team to the state championship for the third time, becoming the first team of any sport in Tallahassee, FL to win three championships in a row. In 2017, Coach Cromartie was named the Florida 3A Girls Basketball Coach of the Year (third coach of the year award) and was named the “2017 Florida Girls Basketball Coach of the Year!”
Coach Cromartie thanks GOD for giving her the opportunity to mentor and coach student athletes to become the best they can be.