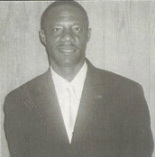 Errick C Lee (2008)
Errick C Lee played basketball, baseball, football, and participated in track and field in high school. He received an athletic scholarship to Miles College and played basketball, baseball and ran cross county track. In basketball, he was a point guard and a shooting guard. In baseball, he was a pitcher, catcher, shortstop, second baseman, third baseman, center fielder, and left fielder. In basketball, he was All Southern Intercollegiate Association Conference (SIAC) second team in 1989, first team All Star in 1989 and 1990. In Basketball, he was All SIAC Honorable Mention in 1989. His teammates voted him Most Valuable Player (MVP) in basketball and baseball in 1988 and
1989. He received a Bachelor of Science Degree from Miles College in Business in 1990. He plays an active role in the West Tabernacle Baptist Church as a Deacon and Youth Supervisor of the Sunday School. He is currently a driver for United Parcel Service, where he has been employed for 13 years and is a member of Kappa Alpha Psi Fraternity, Inc.