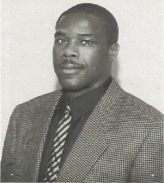 James Frank Drake (2008)  ​
James Frank Drake graduated from Jackson-Olin High School where he played football and ran track. He earned an athletic scholarship to Miles College and played cornerback and strong safety on the football team from 1977-1981. He was the captain of the football team in 1980-1981. Her received a "Leadership Award" while playing football. He also received the designation of "Who's Who Among High School and College Students".  James is currently a Health and Physical Education Teacher. He is an active member of Trinity Zion Church.