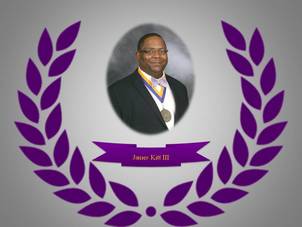 James Kitt III (2016)
James Kitt enrolled at Miles College from Huffman High School, Birmingham Alabama. He received a scholarship to play Football at Miles College from 1994-1997 under Coach Cecil Leonard. James lettered in Football and Track. James was a four year starter on the offensive line for the Golden Bears. He was selected for the All Conference and All SIAC Teams.

James’ community service includes over 10 years as Pack Leader of Boy Scout Troop 284, mentor for A. G. Gaston Boys Club, volunteer for Jimmi Hale Mission and participant in a clothing drive for the homeless. James was a volunteer Income Tax Assistant at Miles College and The United Way.
​
After graduating from Miles College, James worked with the State of Alabama Department of Revenue as Senior Auditor.