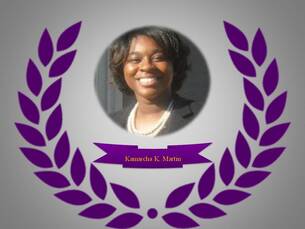 Kamarcha K. Martin (2019)
Kamarcha K. Martin was born on April 9, 1985, to Ms. Retha Martin. She is a graduate of Callaway High School in Hogansville, Georgia (May 2003.) After graduation, she left to attend Miles College in Fairfield, Alabama where she received a Bachelors of Science Degree in Biology (May 2008.) Kamarcha continued her education at Jefferson State Community College in Birmingham, AL and received an Associate of Science degree as a licensed Veterinary Technician (May 2001.) After receiving her license, she decided to advance her education and enrolled in the Tuskegee University School of Veterinary Medicine, Nursing, and Allied Health in Tuskegee, AL. She received a Master's Degree in Veterinary Science. Her area of study was Veterinary Medicine with a specialty in Virology.  Currently, Kamarcha is a Doctoral Candidate in Public Health, Epidemiology. She expects to graduate in December 2019. Bamarcha has always excelled academically throughout her educational tenue. She was not just another great student-athlete while participation in sports; she was an exemplary student on and off the field. Following in her mother’s footsteps as an exceptional athlete; she received a softball scholarship to attend Miles College in 2005. She always kept a 3.2 or above grade point average while serving as an athlete. The need to excel was a part of her insistent behavior. She became a permanent fixture at the position of shortstop from the position of utility player. In the 2005-06 season, she received NCAA honors for leading the nation with the most doubles during a single season. She also played an intricate role in helping Miles College Ladine Softball Team to become the SIAC Western Division Champions in Softball for the first time in the school’s history. She was named to the all SIAC softball team 2006-07. In 2007 she was the teams’ batting leader, led in most runs scored, home runs, and was second in stolen bases at a rate of 35 successful bases stolen. During the 2008 season, she received the outstanding service recognition award for service and dedication to the miles College Softball Team as a volunteer coach.   After graduation from Miles, Karmarcha placed an even higher priority and commitment on her work in the community. Kamarcha dedicated her time and knowledge to a middle school in Homewood, Alabama; teaching an after-school program focused on increasing on softball and science. She expressed the importance of STEM research to the students in her science clinics. Currently, as a Lead Research Specialist for Emory School of Medicine. Kamarcha is engaged in clinical studies focusing on paralyzed patients who experience neurological pain; commonly known as phantom pain. She has published five papers relevant to her research.