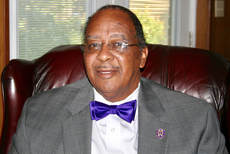 Kenneth R. Lewis
Kenneth R. Lewis is a graduate of Burrell-Slater High School; attended Tuskegee Institute (University). At Tuskegee, He was a member of the 1965 SIAC Championship Swimming Team, a member of the Century Club (scoring 100 points in a single season) and SIAC record holder in the 500-yard freestyle for numerous years. He is a graduate of Miles College with a Bachelor of Arts Degree in Sociology. Founding Member of the Miles College Golden Bears Boosters Club, Life Member of the Miles College National Alumni Association and Life Member of Omega Psi Phi Fraternity Incorporated.
Kenneth is a Retired Law Enforcement Veteran; having served with the Birmingham Police Department in numerous assignments. Most notable are Police Athletic Teams, Crime Prevention Coordinator, Police Academy Instructor, Advance Accident and Accident Reconstruction Instructor. He Served numerous years with the Police Tactical Unit; was Officer of the Month for March, April, and May in 1990, and 1990 Officer of the Year nominee. Retired as a Sergeant in 1992 and continued to serve with the Jefferson County Sherriff’s Office in the Warrant Detail, where He retired after Forty-one years of service.
In 2004 He was Ordained in the Episcopal Church and served ten and one-half years at the Church of The Holy Spirit in Alabaster, Alabama.
​
Return to List>>>