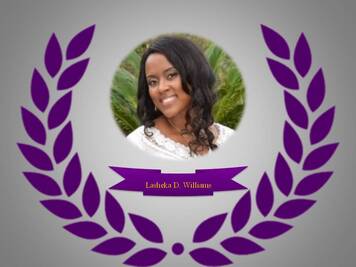 Lasheka D. Williams (2019)
Lasheka D. Williams was born on October 12, 1986, to Theodis and Brenda Williams in Atmore, Alabama. I am a 2005 graduate of Escambia County High School. While in high school, I participated in sports like softball, basketball, dance, and cheerleading. While participating in sports, softball has always been my passion since being introduced to a ball at five years old. After my high school graduation, I earned a Bachelor of Science in Criminal Justice from Miles College in 2009. I was the first member of my family to receive a college degree. While attending Miles, I was a starter for the Miles College Lady Bears Softball Team from 2006 through 2009. Throughout the seasons, I was an asset to the team playing multiple positions from second base, shortstop, catcher, and even the outfield. I was also an active player during the 2009 Southern Intercollegiate Athletic Conference Softball Tournament where we won the first-ever championship in the school's history. After graduation, I pursued in a couple of Criminal Justice Careers with the first being with the Alabama Department of Corrections as an officer in Birmingham, Alabama. I volunteered at Wenonah High School with Cedric Lane as an assistant softball coach while living in Birmingham. After corrections, I decided to relocate to Mississippi to teach Law and Public Safety at Biloxi High School. While teaching there, I was also an assistant softball coach. After a couple of years of teaching, I realized that I wanted to serve and protect. That's when I applied to be a Probation and Parole Officer. I graduated from the Law Enforcement Academy on March 24, 2017, and employed with the Alabama Bureau of Pardons and Paroles as an officer. As of today, I still love the game of softball. I love it so much I still play slow pitch with my all women's team, Second to None. If I'm able to, I'll always play.​
​
Return to list>>>