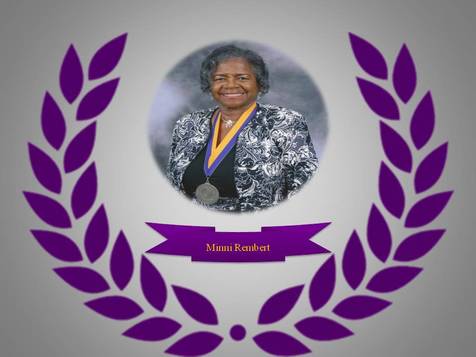 Minni Johnson Rembert (2018)
Minnie Louise (Johnson) Rembert was born in Catherine, AL to the parents of Miller and (Donnie) Johnson delivered by a midwife.  She attended St Peters Lutheran Elementary School.  She was at the top of her class academically.  Her soprano voice was discovered at an early age while singing in the school/church choir.  Minnie attended Miller’s Ferry High School located in Miller Ferry, AL.  There were many accomplishments during her high school years.  She excelled academically, she was the leading running guard on the basketball team and was Class Queen and had the opportunity of riding on the school float with the captain of the football team for four years.
Minnie is a positive product of the Civil Rights Movement.  She attended Miles College in 1957/58 with a Business Major.  She continued her sportsmanship as a Cheer Leader for Miles College.   The skills she obtained while attending Miles College continue to be displayed by always presenting herself as a professional, respectful Christian woman.
She later married Jesse E. Rembert and resided in Philadelphia, PA raising two children.  While in Philadelphia, she served on the Westbrook Lane Parks and Recreation Board of Directors, was a girl scout leader, employed at Pennypacker Elementary School and was a Sunday School Teacher.  In 1979, she continued her education and was employed at the Flint Community Schools as a Supervisor and retiring as a Director of the Infant & Learning Center at Schools of Choice and taught parenting classes to teen parents.  As a retiree, she continues to serve God first, her community and volunteers at the local high school doing what she loves best “helping children of the future.”