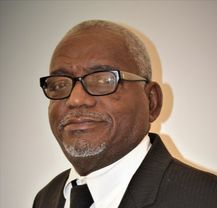 Naulbert T. Nolan
Naulbert Edward Nolan Sr., a native of Alabama, he attended H.C. Technical High school in Buffalo, New York, where he participated in three sports: swimming, football, and basketball.
He returned to Anniston, Alabama, where he graduated from Cobb Avenue High School. He played on the varsity basketball and because of his success, he received a basketball scholarship to attend Talladega College. Naulbert received a Bachelor of Science degree in accounting and minor in Mathematics from Talladega College. He is a member of Kappa Alpha Psi Fraternity, Inc.
Naulbert is a retired small business man with over 36 years of restaurant and food service began his career as a multi-unit supervisor with Church’s Corporate Office. As a restaurant Supervisor, he partnered with Lawson State Community College to provide lunches for Upward Bound students for more than fifteen years. He also worked in the local communities assisting local churches along with Birmingham City Schools with generous donations and support.   He was recognized as a “Partner of the Year” by the Birmingham City School Board for his dedication and service.
Later Naulbert joined Main Venture Franchise Group as an Area Supervisor and part owner.  During his business career, he supported Miles College athletics through financial sponsorship from Church’s Chicken, and in kind donations.  For twenty years he supported and mentored local youth active in the Central Park Athletic Community. Mr. Nolan has also shared his coaching skills and talents for over 20 years in the areas of football, basketball, and baseball. He also served, as a board member during his tenure at Central Park Community Park and served as the coordinator for the Central Park Youth Football Championship trips to Daytona Beach, Florida. This opportunity allowed inner city youth an opportunity to travel to a major sporting event. He enjoys serving the youth in the community.
In 2003, he joined several Miles Alumni in establishing the Miles College Booster Club. As a founder, he served as the booster club first treasurer for eleven years. The Miles College Booster Club began sponsoring bus trips to away games in an effort to support the school’s football team. We also sponsored various fund raisers to benefit the Miles College Athletic Department.
Naulbert has been married to Susan DuCloux for 42 years and has four adult children and six beautiful grandchildren. He attends Our Lady of Fatima Catholic Church where he is a member of the Adult Choir. He enjoys spending time with family and from time to time a good game golf.
​
Return to list