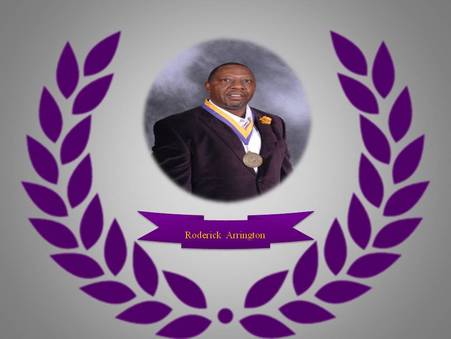 Roderick Leon Arrington Jr.
Roderick Leon Arrington, Sr. attended Miles College from 1983 to 1988. While attending Miles, he was a standout athlete in 3 sports; baseball, basketball and football. Being a phenomenal baseball player, he was selected as the outstanding defensive player of the year (1984), most improved player of the year (1986) and awarded “The Mr. Hustle Award” and selected All Conference SIAC (1987). Roderick's aggressiveness made him a great defensive basketball player. He earned “The Mr. Hustle Award” in 1984 & 1985, Most Valuable Defensive Player, 1985 & 1986 and Defensive Player of the Year for 1987. In his later years at Miles, Roderick put his talent to work on the football field. He earned Most Valuable Defensive Back and selected All Conference SIAC 1987 & 1988. He was an energetic athletic, lettering in all 3 sports. Roderick indeed left his mark here with the Golden Bears.
Roderick's love for sports has carried on to his community. He has coached junior league baseball and football teams for several years where he has carried his teams to playoffs and championships status. He volunteers his spare time at his neighborhood high school training young football players. He is also an umpire at the park where he began coaching. He's been a devoted husband since 1991 and a passionate and carrying father to his 2 sons, Roderick Jr., and Javaris. Roderick credits Miles College and staff for developing him into the person he is today and to be inducted into the Sports Hall Of Fame is an honor he will cherish for life.