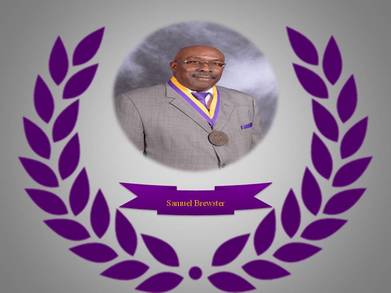 Samuel C. Brewster Jr. (2008)
Samuel C. Brewster Jr., graduated from Hooper City High School in 1968. He excelled in football and lettered in the sport and earned a scholarship to Miles College and played baseball. He played second base from 1969 - 1972 and led the team in steals with 14 in 1969. In 1970 he had a fielding percent average of .890.  During his years at Miles College, he was an officer of the Student Government Association (SGA), and a member of Kappa Alpha Psi Fraternity. He earned a B.S. Degree in 1972 from Miles college in Business Administration. After graduation from Miles College, he moved to Baltimore, MD., where he started a career in professional sales with Quaker Oats and H. J. Heinz Company. He was also a Sales Executive with American Optical and is currently employed as a Sales Representative for AT&T. His community involvement includes working with Birmingham Lock-In and an avid supporter of Sepia, Inc., and the JCCO  Yes Ambassadors Youth Theater. He has become an accomplished golfer. He is a member of Jones Chapel A.M.E Church.