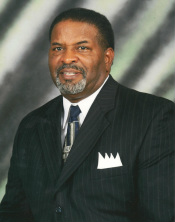 Tony R. Gulley (1998)
Tony graduated from Fairfield High School in 1972, where he played on the (Tigers) football team. He was voted Most Valuable Player his senior year and Captain of the Team.
In the fall of 1972, Tony enrolled at Miles College on an Athletic Scholarship. He played fullback on the Golden Bears football teams. Tony was a First Team Starter from 1972-1975, and Co-Captain of the team in 1974 and 1975. His Head  Coaches were  Jimmy Holifield 1972-1973 and Earl Cheatham 1974-1975.
December 1975, Tony completed all requirements for graduation. In May, 1976, he received a Bachelor of Science Degree in Business Administration from Miles College.
January 1976, Tony was hired as an Account Representative for General Motors Acceptance Corporation and relocated to Huntsville, Alabama. He retired May 2008 as a Portfolio Manager.