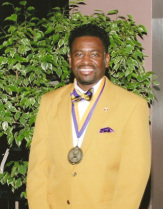 Tyrus L. Moss (2013)
Tyrus L. Moss came to Miles College believing he had the ability to attain athletic success, though a bit insecure after a negative college experience. He left Miles College after collecting many accolades as a two-sport athlete in football and baseball and earning two college degrees, achievements beyond his wildest dreams. Tyrus L. Moss accepted a Miles College scholarship and participated on the football team in the positions of running back and receiver. Under the direction of Coach Cecil Leonard, Mr. Moss and the Mighty Bears sought to return a winning tradition to the team. As a baseball player under Coach Willie Patterson, Mr. Moss played several positions including: shortstop, pitcher, third baseman and outfielder. Mr. Moss was selected for the Southern Intercollegiate Athletic Conference (SIAC) Sportsmanship Award and the SIAC Golden Glove Award in recognition of his baseball skills in 1995. He was chosen for the SIAC Second Team in Baseball in 1995 and 1996, and was ranked number one in the nation by the SIAC for stolen bases per game. Tyrus L. Moss was also a Miles College Baseball letterman for three years. He was on the Dean’s List from 1994 through 1996, reflecting a regard for his academic pursuits. Mr. Moss graduated from Miles College and works as a History Teacher/Athletic Director/Head Baseball Coach at A. H. Parker High School. Mr. Moss participates in community activities through the annual Sickle Cell Walk as a member of Kappa Alpha Psi Fraternity, Inc., with the Operation East program as a member of the New Rising Star Missionary Baptist Church, and as part of voter registration drives and cleanup days with Habitat for Humanity events at A. H. Parker High School. Tyrus L. Moss says Miles College gave him a second life after he had given up on athletics and education. He takes the lessons he learned by walking its hallowed halls and brings them to his current players and students.

The most important lesson: If you believe it you surely can achieve it, but it is what you believe, not what others may think, that counts.