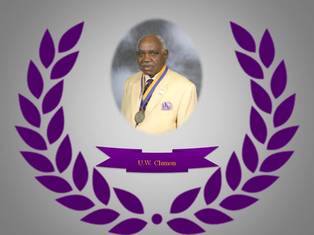 U.W. Clemon (2016)
A Retired Federal Judge, at age 13 he decided to become a lawyer. While a student at Miles College in 1962, he confronted the infamous Bull Conner over Birmingham’s Segregation laws. He marched with Dr. Martin Luther King Jr. during the demonstrations the following year, and desegregated the Birmingham Public Library.
In 1974, U. W. Clemon was one of the first two blacks elected to the Alabama Senate since Reconstructions.
In 1980, President Jimmy Carter appointed Attorney U. W. Clemon as Alabama’s first black Federal Judge when he nominated him for a set on the United States District Court for the Northern District of Alabama. He later became the Chief Judge.
Judge U. W. Clemon retired in 2009. He now practices law in Birmingham. He is a member of Alpha Phi Alpha Fraternity.  A member of Sixth Avenue Baptist Church and Deacon