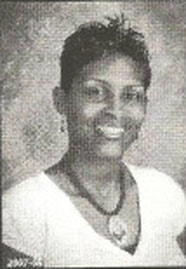 Yolanda Maddox-Wyatt (2007
Yolanda Maddox-Wyatt born, May 2, 1969 to James and Mamie Maddox, the second of four beautiful girls. Education was instilled in Yolanda very early in life. Her parents taught she and her sisters to work hard and be law abiding citizens. Yolanda received her primary education from Newton County School System. She pursued her secondary education at Miles College in Birmingham, Alabama. Here, Yolanda received a Bachelor of Science Degree in Business Administration and a Master of Education Degree from Georgia College and State University. Yolanda, opted not to enter into the corporate world, but instead decided to give back to her hometown as an educator for the Newton County Board of Education. Being recommended by a former basketball coach, Yolanda assumed her first role in education in 1992. Over the course of last 15 years, she has served as basketball and track coach diligently and faithfully. While attending Miles College, Yolanda made numerous athletic accomplishments. She was named SIAC Player of the Year, MVP, Outstanding Rebounder, and most of all, nominated as a Kodak All-American. In September of 1996, Yolanda married Timothy Wyatt, her high school sweetheart. To this union, two children were born. Jamica, a senior at Augusta State University, is carrying on with the athletic talent from both parents. Timarcus is a junior at Newton High School where he excels in advanced academics. The 38 year old Delta Sigma Theta is currently teaching at her high school alma mater, Newton High School in the special education department. She is also an independent beauty consultant for Mary Kay Cosmetics. Keeping the work life balanced is no major task for this professional. The secret is keeping God first.