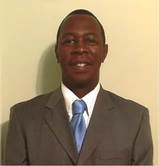 Paul Beaty
Paul Beaty was Born in Ozark, AL., to Mr. Dillard Lee and Norma Jean Beaty. He was the fifth of six children that grew up in a very competitive sibling environment. He grew up playing many sports and found basketball to be his passion. He recalls from the seventh grade receiving medals or trophies as most valuable player. Paul was taught at an early age to put God first in his life, work hard to complete his education which is the road to a successful life.
Paul graduated from Carol High School in Ozark AL. in 1989, where he played basketball and went on to play for Miles College Golden Bears. He played point-guard under coaches Alfred Baker and Anthony Colvin from 1989 to 1993. As a freshman, he was nominated freshman of the year. His sophomore year he was number one in assist in the SIAC Division II, three consecutive years. As a junior, he received most improved player and MVP as a senior. Paul graduated from Miles College with a Bachelor of Science Degree in Business Administration and currently a self-employed independent contractor.
Paul's community involvement includes mentoring at the Boys and Girls Club and working with Birmingham Volunteer Community clean up. He attributes his success in life to his parents.